‘Fire Safety for All’ in Buildings – Reboot & Reload !
[ www.fire-safety-for-all.eu ]

A.   BUILDING STRUCTURAL RELIABILITY IN FIRE

Fire-Induced Progressive Damage in Buildings is distinguished from Disproportionate Damage – a related but different structural concept – by the mode of damage initiation.  Until this phenomenon is understood, and unless it is impeded, or resisted, by building design … Fire-Induced Progressive Damage will result in Disproportionate Damage … and may lead to a Collapse Level Event (CLE), which is entirely unacceptable to the general population of any community or society.  Currently, fire engineering is ill-equipped to respond to the challenge of this ‘hot form’ structural concept, while its practitioners suffer from a distinct inability to communicate meaningfully with other design disciplines.

It should be of major concern to the International Fire Science and Engineering Community that building designers continue to work in a vacuum, since the collapse of World Trade Center Buildings 1, 2 & 7 in New York City, on 11 September 2001 … without adequate practical design and construction guidance.

NOTE:  The Updated Approach to Structural Fire Engineering discussed here is fully consistent, not only with NIST’s 2005 & 2008 9-11 WTC Recommendations, but also with Annex I of EU Construction Products Regulation 305/2011 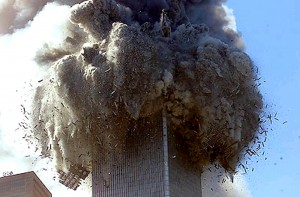 A Working Commission of CIB (International Council for Research & Innovation in Building & Construction) … CIB W14 is an international, multi-stakeholder, trans-disciplinary, pre-normalization forum for discussion, and action, on research and innovation in Fire Science and Engineering for the spatial planning, design, engineering, construction and operation of a Safe, Resilient and Sustainable Built Environment for All.

1.    To create an ongoing information-gathering, research and innovation focus for the development of a comprehensive, coherent, rational and empirical basis for the implementation of a Safe, Resilient and Sustainable Built Environment for All, which includes fire science and engineering practices, procedures and design methodologies.

2.   To promote the acceptance of Fire Science and Engineering Practices, Procedures and Design Methodologies worldwide, and to encourage their use in fire safety related international/regional/national/local legislation, codes, regulations, standards and administrative provisions … by all sectors of society.

3.   To provide Technical Input, from a fire science and engineering perspective, to other relevant CIB Working Commissions and Task Groups.

4.   To facilitate a Transfer of State-of-the-Art Fire Science and Engineering Knowledge and Technologies at international level.

5.   To encourage Capacity Building for fire science and engineering worldwide.

6.   To liaise and co-operate/collaborate with Other Organizations having similar or related aims and objectives.

Members of this Working Commission have to be either a Representative of a CIB Member Organisation or an Individual CIB Member.

International Standard ISO 21542: ‘Building Construction – Accessibility & Usability of the Built Environment’ was published as a full standard in December 2011.  For the first time … Accessibility has been clearly defined in this Standard as including: ‘access to buildings, circulation within buildings and their use, egress from buildings during the normal course of events, and evacuation in the event of a fire emergency’.  Also, for the first time … substantive texts relating to Fire Safety and Protection of ‘People With Activity Limitations’ in Buildings have been incorporated into the main body of the standard.

ISO 21542 provides fire safety related information which is practical and easy to understand.  This standard does no more than outline general principles, give initial direction … and set out a broad, common framework for the future international development of this important aspect of fire engineering design.

The approach taken in developing this innovative framework is robustly supported by the Recommendations in the 2005 NIST(USA) Final Report on the World Trade Center 1 & 2 Tower Collapses … directly relevant, because the typical problems encountered by people with activity limitations during a ‘real’ serious fire incident were highlighted and closely examined …

N.B. The percentage of building users with activity limitations would have exceeded 8% … terminology is important !

N.B. This brings into question the whole concept of standard movement times for people evacuating.  In reality, there is no such thing as a ‘standard’ human being … and even if two people appear to be similar, the way they behave in a ‘real’ fire incident may vary considerably.

N.B. This has significant implications for the minimum clear and unobstructed width of all evacuation staircases and door openings.  Wider staircases greatly facilitate rescue and assisted evacuation for people with activity limitations.

With regard to implementation … design/construction and product/system solutions are readily available.  Please contact us.

ISO 21542 has provided a good start for future international efforts … but a lot of hard work remains.  This is a very complex area of human behaviour and ability-related building performance !

Essential starting points for the drafting of this Reflection Document were …

1.  Lay down some key definitions.  The language and terminology in the 2001 World Health Organization’s International Classification of Functioning, Disability & Health (ICF) to be used.
2.  Elaborate relevant human and social rights contained in international law.  At the time of writing, just a small number of countries have not ratified the 2006 United Nations Convention on the Rights of Persons with Disabilities (CRPD) … for example: the United States of America ;  and within the European Union, Ireland, Finland and The Netherlands (Holland).
3.  Where available, examine statistics to establish correct scale.  In 2012, the United States Census Bureau issued Americans with Disabilities: 2010 (Household Economic Studies) … and just recently, the European Commission published Staff Working Document SWD(2014) 182 final: Report on the Implementation of the UN Convention on the Rights of Persons with Disabilities (CRPD) by the European Union, which gives a good overview of EU statistics.
4.  Literature Review … priority must be given to empirical evidence, i.e. observation of the wide range of real world fire-incident human behaviour, perception and abilities.  Unless properly verified and validated, computer fire behaviour models and evacuation simulations cannot be considered.

To treat this aspect of building performance as a token addendum to so-called ‘mainstream/able-bodied/normal’ occupant fire safety and protection is a long obsolete approach which has resulted, and will always result, in the flawed implementation of a dysfunctional fire engineering design solution.  It has been evident, for many years, that it is no longer technically adequate … and it is, today, both socially and legally unacceptable !

An examination of current statistics indicates that the scale of this issue requires a thorough re-analysis and re-elaboration … from first principles.

The use of circulation space in a building is a continuum … facilitating, at any particular time in the long life cycle of the building …

–  Independent Occupant Access To and Egress From building facilities, during normal day-to-day conditions ;
–  Independent Occupant Evacuation, in the event of a fire incident (for example), or a practice evacuation exercise … to an Accessible Place of Safety which is remote from the building ;
–  Assisted Occupant Evacuation by firefighters … necessary, if building management systems and procedures are unreliable or break down ;
–  Firefighter Access to the seat of the fire in a building, while Occupants may still be evacuating … therefore, Contraflow must also be considered ;
–  Firefighter Removal from the building … or, in the event of injury, Firefighter Rescue.

And although a building may have been specifically designed to facilitate Phased Evacuation … in some circumstances it may be necessary to implement a Single Stage, ‘All-Out’ Evacuation Strategy.

Adequate consideration must also be given to such issues as disability-related social stigma in places of work and public assembly … human perception and variance, i.e. variation from and dispersion around a common individual type and his/her behaviour which is found in ‘real’ building occupant populations … and the presence or absence, locally, of social resilience.

Those people, of all ages, who are unable to perform, independently and without aid, basic human activities or tasks – because of a health condition or physical/mental/cognitive/psychological impairment of a permanent or temporary nature.

[ This definition is derived from the World Health Organization’s International Classification of Functioning, Disability & Health (ICF), adopted on 22 May 2001.]

a)  wheelchair users ;
b)  people who experience difficulty in walking, with or without aid, e.g. stick, crutch, calliper or walking frame ;
c)  frail, older people ;
d)  the very young (people under the age of 5 years) ;
e)  people who suffer from arthritis, asthma, or a heart condition ;
f)  the visually and/or hearing impaired ;
g)  people who have a cognitive impairment disorder, including dementia, amnesia, brain injury, or delirium ;
h)  women in the later stages of pregnancy ;
i)  people impaired following the use of alcohol, other ‘social’ drugs, e.g. cocaine and heroin, and some medicines, e.g. psychotropic drugs ;
j)  people who suffer any partial or complete loss of language related abilities, i.e. aphasia ;
k)  people impaired following exposure to environmental pollution and/or irresponsible human activity, e.g. war ;   and
l)  people who experience a panic attack in a fire situation or other emergency ;
m)  people, including firefighters, who suffer incapacitation as a result of exposure, during a fire, to poisonous or toxic substances, and/or elevated temperatures.

A neurological disorder marked by the inability of a person to recognize that he/she has an activity limitation or a health condition.

Aggression which is a means to another end, e.g. pushing someone aside to escape from danger in a fire emergency.

Aggression which functions to protect others.

A sudden overwhelming feeling of anxiety, which may be of momentary or prolonged duration.

[ Anxiety is the normal response of the human body to recognised danger. Numerous reflexes are involved. The supply of blood to the muscles is greatly increased, partly because the heart beats more rapidly and strongly, and partly because the blood vessels of the muscles dilate while those of many other organs constrict, diverting the flow of blood to where it is most needed. The muscles themselves are tensed. Breathing is deeper and more rapid. The mind becomes more alert, and the pupils dilate, admitting more light to the eyes.]

A momentary period of intense fear or discomfort, accompanied by various symptoms which may include shortness of breath, dizziness, palpitations, trembling, sweating, nausea, and often a fear by a person that he/she is going mad.

[ Panic attacks are initially unexpected, and typically last no longer than 15 minutes.]

The ability of a person – resulting from training and regular practice – to carry out complex, well-organized patterns of behaviour efficiently and adaptively, in order to achieve some end or goal … in this instance, to independently evacuate himself/herself from a building to an accessible place of safety which is remote from the building.

[ Special attention must be paid to the necessary adaptability of a building occupant’s evacuation behaviour, especially where that person has a mental or cognitive impairment.]

Regarding this issue … it is not helpful to simply direct people (e.g. architects, building managers, fire engineers, and the general public) and their queries/problems to local fire services and/or Authorities Having Jurisdiction (AHJ’s).  Typically in Europe, these organizations will respond with silence.  They are usually not equipped, or trained, to deal with the issue … and their level of awareness is poor to non-existent.  Where relevant national regulation/code requirements do exist in Europe, anecdotal evidence strongly suggests that the level of compliance is low.

Far too many people in policy and decision-making roles and/or positions of authority/control in buildings ‘believe’ that management procedures, alone, will be sufficient to deal adequately with the fire evacuation of people with activity limitations … no matter what the type of building involved.  This ‘belief’ is not only ridiculous … it is dangerous !

Particularly in the case of design for fire evacuation, it is important for the fire engineer to follow all potential circulation routes through and from a building to accessible ‘places of safety’ remote from the building … and to maintain a continuous linking of easily assimilated information, whether visual, aural or tactile.  Standard reference points for tactile information should be introduced as a matter of urgency in all buildings, i.e. a Braille zone located between 1200 mm and 1300 mm above Finished Floor Level (FFL), particularly at building entrances and final fire exits.

The word ‘escape’ should not be used here, in any context … as this communicates an almost reflex action by people trying to avoid imminent danger – without any prior preparation, organization or strategy.  In this sort of situation, vulnerable building users will always suffer.