Accessibility IS a Fundamental Human Right !

‘ For many Weak and Vulnerable People, today’s Complex Human Environment is inaccessible and unsafe … a hostile ‘reality’ which prevents independent functioning and participation in a local community;  it is a blatant denial of their human rights.’

Relevant Human Environment (social – built – virtual – institutional) Factors … factors which are external, or extrinsic, to the context of a person’s life and living situation … include policies and standards, negative attitudes and stigma, lack of services, problems with service delivery, inadequate funding, lack of accessibility in the built environment and to electronic, information and communication technologies, lack of consultation and involvement, and an absence of reliable data and evidence.

Take a really close look at the photograph below … and see a staircase which, in spite of all the legislation in the EU Member States, contravenes almost every accessibility-related design guideline.  It is far from being an unusual scene in our European Built Environment …

Now, imagine the consequences of one, tiny slip …

Which is why our concern must be with Accessibility for All … which includes consciously thinking about children under the age of 5 years, women in the later stages of pregnancy, and frail older people (not all older people !) … and how they use and interact with their surroundings.

In addition, however … our attention must also turn to the large numbers of people, in all of our societies, with health conditions which result in serious impairments, activity limitations and participation restrictions.  As a prime example, consider the Big-4 Non-Communicable Diseases (NCD’s): Cardiovascular Diseases (e.g. heart attacks and stroke), Cancers, Diabetes, and Chronic Lung Diseases.

These 4 NCD’s – targeted in a World Health Organization (WHO) Global NCD Campaign – share health risk factors (tobacco use, unhealthy diet, lack of physical activity, harmful alcohol use) … cause more than 36 million deaths annually (almost 80 % of deaths, from such diseases, occur in low and middle-income countries) … and result in a high proportion of disability (66.5 % of all years lived with disability in low and middle income countries).

NCD’s can limit one or more of a person’s major life and living activities … such as walking, eating, communicating, and caring-for-oneself.  Examples of common NCD-related impairments include paralysis due to stroke, and amputation as a result of diabetic neuropathy.

When Easily Assimilated Signage IS Essential in Buildings …

International Standard ISO 21542: ‘Building Construction – Accessibility & Usability of the Built Environment’ was published in December 2011, as a full standard.  In its Introduction, ISO 21542 is linked to the U.N. Convention on the Rights of Persons with Disabilities (CRPD) … almost like an umbilical cord.

The scope of ISO 21542 covers public buildings.  The Accessibility Agenda in the U.N. Convention is very broad … so much standardization work remains to be completed at international level.

I use the word ‘accessibility’, and not ‘access’ … because Accessibility has been defined in ISO 21542 as including … ‘access to buildings, circulation within buildings and their use, egress from buildings in the normal course of events, and evacuation in the event of an emergency’.

A note at the beginning of the standard also clarifies that Accessibility is an independent activity, i.e. assistance should not be necessary … and that there should be an assurance of individual health, safety and welfare during the course of those (accessibility-related) activities.

During the very long gestation of ISO 21542, an overwhelming consensus emerged in favour of using the term Accessibility for All … thereby sidestepping the thorny issue of different design philosophies which are described as being accessibility-related but, in practice, are limited and/or no longer fit-for-purpose. 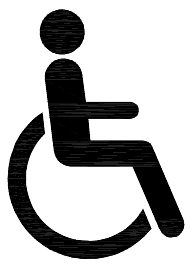 The Accessibility Symbol used throughout ISO 21542 is shown above.  I know that a small group of people from different countries worked very hard on this particular part of the standard.  My only contribution was in relation to the inclusion of Figure 72, concerning Fire Evacuation.

This ‘accessibility’ symbol is an attractive, modern and, of course, abstract representation of a concept … a person with an activity limitation using a wheelchair.  The symbol succeeds very well in communicating that concept.

However … as an Accessibility for All Symbol … encompassing people with other than functional impairments, e.g. hearing and visual impairments … and children under the age of 5 years, women in the later stages of pregnancy, frail older people … and people with the four main types of non-communicable disease discussed above … is this symbol, also, limited and no longer fit-for-purpose ?? 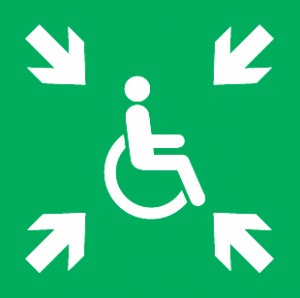 Shown next, above, is the proposal for a new Area of Rescue Assistance Sign … which is contained in ISO 7010:2011 / FDAM 115 (2013).  While it is nice to finally see this Safety Sign appear in the mainstream of safety signage … the title being proposed for the sign and the explanatory texts which accompany it are very problematic …

In ISO 21542, we use the term Area of Rescue Assistance … which is easy for everybody to understand, including building users, building managers and firefighters, etc., etc.

We also explained, in ISO 21542, that a Place of Safety is a remote distance from the building … not anywhere inside the building !

(g)  Emphasizing the importance of mainstreaming disability issues as an integral part of relevant strategies of sustainable development,

As ‘disability’ moves closer towards … and is integrated and fully included in the ‘mainstream’ of sustainable community life and living … it is absolutely imperative that individuals and organizations who make up the Disability Sector become much more cohesive (far less fractious within) … that they begin to fully understand the practices and procedures of the mainstream … and actively and robustly engage with that mainstream.

It is ridiculous, for example, that a large amount of the Sector’s energy is still being diverted into meaningless meditations and endless tracts on whether it is ‘universal design’, or ‘design-for-all’, or ‘inclusive design’, or ‘facilitation design’, etc … when an entirely new design paradigm is being demanded by a world (our small planet when seen from the moon !), which is experiencing enormous levels of human poverty, natural resource shortages, human rights violations, and severe weather events.  The overriding priority must be ‘real’ implementation … Effective Accessibility for All !

And … Effective Accessibility for All is but one component of …

‘Social Wellbeing for All in a Sustainable Built Environment’

While the wider international design community is working hard on developing an array of Accessibility Symbols to facilitate different health condition and impairment categories, and to suit different environmental situations, e.g. a fire emergency in a building … I recently encountered another interesting contribution …

2012-05-31 (2021-08-02):  The Revised International Standard  ISO 21542: ‘Building Construction – Accessibility & Usability of the Built Environment’  was published on 1 June 2021.  Many years before, however, a decision was taken to link this Standard directly to the United Nations  Convention on the Rights of Persons with Disabilities  (#CRPD) … specifically now referencing Preamble Paragraph (g) and Articles 9, 10, 11, 12 and 19 in its Introduction.  Reading the document, this linkage looks and feels very naturally like an unbreakable umbilical cord !

ISO 21542 has significantly widened the meaning of the concept #Accessibility4ALL … a normal evolutionary process … in particular, the #FireSafety4ALL Texts.  I wonder, though, how many people would ever have considered  Good Indoor Air Quality  to be on the ‘Accessibility’ Menu ??

Much lower rates of direct fresh air ventilation … and a dramatic reduction in accidental or unintended air seepage from, or into, buildings (depending on local climate conditions) … all driven by an urgent need to conserve energy and to impose greater energy efficiencies on the energy which is actually consumed … are, once again, one of the main causes of serious health problems for ALL #BuildingUsers …

Building Related Ill-Health:  Any adverse impact on the health of building users – while living, working, generally occupying or visiting a specific building – caused by the planning, design, construction, management, operation or maintenance of that building.

I say “once again” because, in Europe, we have been here before … after the two big oil crises of the 1970’s.

Symptoms and signs may include:

These symptoms and signs are present in the population at large, but are distinguished by being more prevalent in some building users, as a group, when compared with others.  The symptoms and signs may disappear, or may be reduced in intensity, when an affected person leaves the building.  It is not necessary that everyone in a building should be affected before building related ill-health is suspected.

The indoor pollutants considered in ISO 16814 include human bio-effluents, which have often been the principal consideration in air quality and ventilation design, but also the groups and sources of pollutants which can reasonably be anticipated to occur in the building during its long Life Cycle.

These pollutants, depending on the sources present, may include:

The following Two Performance Indicators of Good Indoor Air Quality, developed with the aim of protecting human health, are recommended:

[ While the current CoVID-19 Pandemic lasts … these are Essential ‘Health’ Performance Indicators, as opposed to ‘Safety’ Indicators … and they should be stringently operated and constantly monitored in all building types. ]

2009-11-25:  In the midst of an economic, financial and fiscal crisis in Ireland … the country has recently been hit by a Major Flood Emergency in the West and South … extending inland almost to the centre.  The emergency will continue over the next few days.

There appears to be no central co-ordination of the response to this National Emergency.  No public guidance or other announcements have been published in the national media.

Further to the full page advertisement promoting the National Older & Bolder Campaign, which was printed on Page 7 of The Irish Times (2009-11-19) … the contents of World Health Organization (WHO) Fact Sheet: ‘Older Persons in Emergencies’, drafted following the 2006 Lebanon Humanitarian Crisis, are both appropriate and particularly relevant for Ireland now …

When dealing with older people in emergencies, a number of issues which might affect them will require special consideration.  Apart from specific chronic disease and disability related issues, two major factors contribute to increased vulnerability of older people in emergencies: the ‘normal’ challenges of physical ageing and social loss, and the ‘environmental’ challenges.  In a crisis, minor impairments which do not interfere with daily functioning in the normal environment can quickly become major handicaps that overwhelm an individual’s capacity to cope.  For instance, an older person with arthritic knees and diminished vision, living alone in a high-rise apartment with no family members or friends nearby, can become incapable of getting food or water or of fleeing danger, and may be overlooked by neighbours.

There are several specific issues that affect older people, separately or in combination, and which can impact on their ability to respond or react in an emergency.  Awareness of these specific issues by all those giving aid, or surrounding them, will improve interactions.  Knowledge of the age profile in an affected community, as an emergency response is prepared, will help to ensure that older people at risk are identified and that appropriate supplies and services are provided on-site.

7.   Changes to Patterns of Digestion

13.  Reliance of Other Family Members on Older People

Last but not least: Older People should not be considered solely as a Special Needs Group.  From numerous accounts of natural disaster and armed conflict situations, it is known that their knowledge of the community, previous experiences with such events, and position of respect and influence within their families and communities are critical resources in dealing effectively with emergencies.