At this time, in London … multiple, fragmented investigations are taking place into the actual fire incident … the role of the Local Authority, and building management … those involved in the refurbishment (‘tarting up’) design and construction … the fire services, particularly their ‘Stay Put’ Policy and how it adversely impacted on vulnerable Tower occupants during the emergency … and the highly flawed regulatory model of Building and Fire Codes with light-touch Control, which is still operating in England.  One of Murphy’s Laws immediately springs to mind with regard to the intended ineffectiveness of this overly-complex process !

Many other countries have adopted some or all of this modern English regulatory model which, after the repeal of an older Bye-Law format, has been shaped by political expediency, cost-effectiveness and general ineptitude … with little or no adaptation to local conditions in the adopting jurisdictions.  Ireland adopted this model with some, but not a lot, of adaptation.

On 6 June 2018 … while that investigative activity was hitting the headlines in England … Minister Eoghan Murphy, T.D., Ireland’s Minister for Housing, Planning and Local Government, quietly published the Report: ‘Fire Safety in Ireland’ … http://www.housing.gov.ie/local-government/fire-and-emergency-management/fire-safety/eoghan-murphy-publishes-report-fire … by a High-Level Task Force within his Department’s National Directorate for Fire and Emergency Management, after serious concerns and fears had been expressed in the public media that a similar fire tragedy might also occur in this jurisdiction.

To be crystal clear … this Report is a Bureaucratic Whitewash … an insult to the Public !  Nice sounding technical ‘blarney’ camouflages a failure to deal directly with critical issues, and answer concerns … while other important issues are avoided altogether. 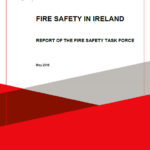 Expanding on my comments in the Interview with Barry Lenihan, on RTE Radio 1’s Drive Time early evening news programme on Friday (2018-06-08) …

A.  Initially, Irish Local Authorities were requested to carry out a preliminary survey to identify all buildings of more than six storeys, or 18m in height.  Specifically, they were asked to identify those buildings which had an external cladding system which might be a cause for concern.

This height threshold of six storeys/18m is arbitrary … an external cladding system can be just as much a cause for concern in a building which is lower.  Imagine discarded cigarette butts or a rubbish fire at the base of such a system … and the resulting speed of fire spread and development across a building façade !

B.  The highly flawed regulatory model of Building and Fire Codes, with light-touch Control, which resulted in the Grenfell Tower Fire Tragedy … we also have.  Wake up and smell the coffee Ireland !

At the beginning of the 1990’s, when Ireland had been persuaded by the European Commission to finally introduce legal, national building regulations having a functional format … our National Authority Having Jurisdiction, in desperation, grabbed the then Approved Documents for England & Wales … brought them back to Ireland, put Irish covers on them, and originally called them ‘Technical Documents’ … but, after seeing a tiny ray of inspiring light, later changed their title to the more accurate ‘Technical Guidance Documents’ !  This hunger for adopting all things English which are fire safety related continues to this day … with a similar, ongoing division of Technical Guidance Document B: ‘Fire Safety’ into 2 Separate Volumes.

This may have been a convenient response under pressure … but it has been very short-sighted.  It has impeded the growth of a comprehensive and coherent philosophy on Safe, Inclusive, Age-Friendly, Resilient, Sustainable Planning, Design and Construction Codes/Controls which is suited to an Irish context and responsible local needs (not desires!).

D.  To accurately present Fire Safety Trends in Ireland … it is not enough to furnish reliable fire fatality statistics.  It is also necessary to produce reliable fire injury statistics … and reliable information on direct/indirect socio-economic losses.

E.  The quality of fire safety related construction on Irish Building Sites continues to be very poor and problematic.  Fire Compartmentation is nowhere near being adequately – never mind acceptably – reliable !  And during the last few years we have had quite a number of close-calls concerning fire incidents in medium-rise residential buildings.

F.  Fire Evacuation for people with activity limitations is still handled atrociously in our current building regulations.  This is ironic because, on 20 March 2018 last, Ireland had to be dragged screaming to ratify the U.N. 2006 Convention on the Rights of Persons with Disabilities (CRPD) !

Positive Progress By Another Path !

1.  Abandon the outdated English functional requirements in THEIR building regulations … and adopt a far better, more up-to-date body of functional requirements which is already on the Irish Statute Books … Annex I of the European Union’s Construction Products Regulation 305/2011.  And because there are important horizontal linkages between requirements … immediately finish the ridiculous current separation between Fire Safety requirements and all of the other requirements.  And yes … new Technical Guidance Documents will have to be drafted. 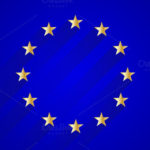 Regulation (EU) No 305/2011 of the European Parliament and of the Council, of 9 March 2011, laying down harmonized conditions for the marketing of construction products and repealing Council Directive 89/106/EEC

2.  Yes … ‘Persons Having Control’ of buildings have responsibilities with regard to fire safety.  But that is only one side of the coin !  National and Local Authorities Having Jurisdiction have greater responsibilities.

If we are at all serious about Consumer Protection … bad, inadequate, faulty construction must be prevented beforehand … it is too late, too costly and, in many cases, too impractical to correct afterwards.  Self Regulation by building design professions and construction organizations is NO Regulation !  Stringent, independent technical control inspections must be carried out on all projects by Building Control personnel … which used to happen in Dublin City/County and Cork City/County prior to the introduction of legal building regulations in the early 1990’s … and, depending on complexity, must also be carried out at critical stages during the construction process.

Building Control Sections in all Local Authorities must be properly resourced with competent personnel, equipment, training and support infrastructure.

Building Control Inspection Reports must be made available for public view.

3.  Firefighters are NOT a disposable Social Asset !  National and Local Authorities Having Jurisdiction … and some Chief Fire Officers … must begin to understand this fundamental truth !

Fire Services in all Local Authorities must each be properly resourced according to local needs … with competent personnel, equipment, training and support infrastructure.  Shared provision of resources looks very neat on paper but, in practice, works very badly.  Refer to the Grenfell Tower Fire and London Fire Brigade having to borrow firefighting equipment from other Fire Services.

After the 2015 Tianjin Regional Fire Devastation, in China, and the 2001 WTC Attacks on 9-11, in New York City … front line firefighters must be supported by Specialist Hazard Appraisal and Structural Engineering Units.

For Firefighter Safety in buildings and to quickly find people with activity limitations waiting in Areas of Rescue Assistance and/or other survivors in different locations … a portable and reliable Thermal Imaging Camera is an essential piece of every firefighter’s equipment.

And Firefighter Safety begins with good building design.  In all but the most simple building types, Circulation Routes must be designed for Contraflow … people moving away from a fire in a building and towards safety while, at the same time, heavily equipped firefighters are entering the building and moving towards the fire.

There is no place for ‘Stay Put’ Policies in Irish Residential Buildings of any height. 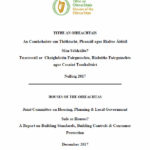 This was a good effort by our public representatives … but they missed core issues !

After The Grenfell Tower Fire !

With regard to Command & Control of Large Scale Emergencies … English AHJ’s should have paid attention to the 2005 & 2008 U.S. National Institute of Science & Technology (NIST) Recommendations following the 9-11 WTC Buildings 1, 2 & 7 Collapses.

The Fire Safety Objectives in current Building & Fire Codes/Regulations are very limited.  In Ireland, this is clearly stated in Technical Guidance Document B …

‘ Building Regulations are made for specific purposes.  Part B of the Second Schedule to the Building Regulations is therefore primarily concerned with the health, safety and welfare of persons.  The fire safety measures outlined in this guidance document are intended for the protection of life from fire.’

Only insofar as it is necessary to protect the lives of able-bodied building users/occupants … is there a concern for property protection.

There is only inadequate, token concern for the protection of people with disabilities.

In the photograph below … look closely at the External Firefighting Operations at the bottom of the Tower.  There are limits to what can be achieved from outside a building !